Dr. Sean B. Carroll, Vice President for Science Education at the Howard Hughes Medical Institute, was the 2018 Whitney lecturer for the Whitney Lecture Series. Stay tuned for information on the next Whitney Lecture! 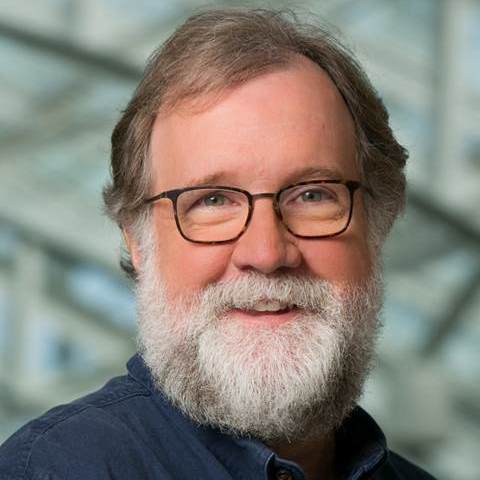 Dr. Sean B. Carroll is an award-winning scientist, author, educator, and film producer. He leads the Department of Science Education of the Howard Hughes Medical Institute, the largest private supporter of science education activities in the US, and is the Allan Wilson Professor of Molecular Biology and Genetics at the University of Wisconsin.

The Serengeti Rules: The Quest to Understand How Nature Works and Why It Matters
November 15, 2018
Evening Lecture 7 p.m.
Lohman Auditorium, Whitney Laboratory for Marine Bioscience 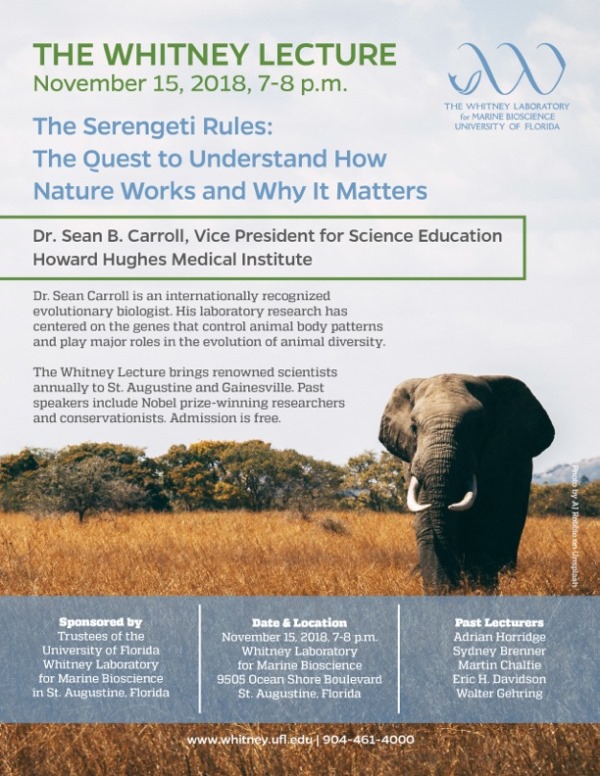 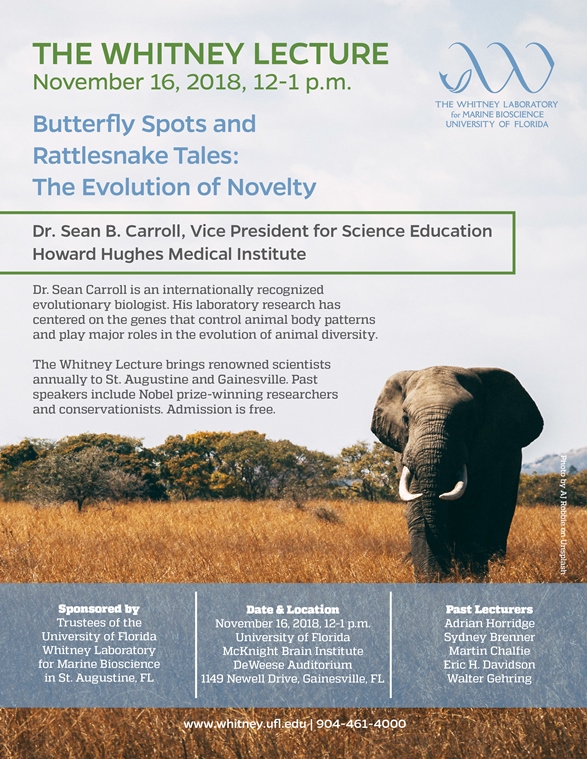 An internationally-recognized evolutionary biologist, Carroll's laboratory research has centered on the genes that control animal body patterns and play major roles in the evolution of animal diversity. In recognition of his scientific contributions, Carroll has received the Benjamin Franklin Medal in Life Sciences, been elected to the National Academy of Sciences and the American Philosophical Society, named a Fellow of the American Academy of Arts and Sciences and the American Association for the Advancement of Science, and elected an Associate Member of the European Molecular Biology Organization.

A prominent science communicator in print, on radio, and on television, Carroll is the author of The Serengeti Rules: The Quest to Discover How Life Works and Why It Matters (Princeton University Press), Brave Genius: A Scientist, A Philosopher, and Their Daring Adventures from the French Resistance to the Nobel Prize (Crown, Random House), Remarkable Creatures: Epic Adventures in the Search for the Origins of Species, which was a finalist for the 2009 National Book Award for non-fiction (Houghton Mifflin Harcourt), The Making of the Fittest (2006, W.W. Norton) and of Endless Forms Most Beautiful: The New Science of Evo Devo (2005, W.W. Norton). He also wrote a regular feature "Remarkable Creatures" for the New York Times Science Times. For his many literary contributions, Sean received Rockefeller University's Lewis Thomas Prize for Writing About Science in 2016.

Carroll is also author of the student text Into The Jungle: Great Adventures in the Search for Evolution (2008, Pearson, Benjamin Cummings), co-author with Jen Grenier and Scott Weatherbee of the textbook From DNA to Diversity: Molecular Genetics and the Evolution of Animal Design (2nd ed, 2005; Blackwell Scientific) and with Anthony Griffiths, Susan Wessler, and John Doebley of the textbook Introduction to Genetic Analysis (10e, 2011, W.H. Freeman and Co.).

Carroll has served as executive producer or executive in charge of several feature documentary films or series including The Farthest (2017), Amazon Adventure (2017), The Lucky Specials (2017), Spillover: Zika, Ebola & Beyond (2016), Mass Extinction: Life at the Brink (2014) and Your Inner Fish (2014), as well as approximately twenty short films, which have garnered various awards. His first two books were the basis for, and Carroll was the scientific consulting producer of, a two-hour NOVA special What Darwin Never Knew that was first broadcast in December 2009 on the occasion of the 150th anniversary of Darwin’s On the Origin of Species.

For his educational contributions, Carroll has received the Stephen Jay Gould Prize for the advancement of the public understanding of evolution from the Society for the Study of Evolution, the Distinguished Service Award of the National Association of Biology Teachers, and the Viktor Hamburger Outstanding Educator Award from the Society for Developmental Biology. and numerous honorary lectureships. Carroll was named one of America's most promising leaders under 40 by TIME Magazine in 1994.

He earned his B.A. in Biology at Washington University in St. Louis (1979), his Ph.D. in Immunology at Tufts Medical School (1983), and carried out his postdoctoral research with Dr. Matthew Scott at the University of Colorado-Boulder. He has received an honorary Doctor of Science from the University of Minnesota (2009) and from Tufts University (2017).

The Whitney Lecture started in the late 1990’s with generous endowed support from an esteemed research scientists and scientific adviser at Whitney, who wished to remain anonymous. The series, hosted by our Board of Trustees, is designed to bring preeminent scientists to the Whitney lab and the University of Florida’s main campus to help build on our strength in marine biomedical research and share this with our main campus scientific community. Past speakers have included Nobel prize-winning researchers as well as artists and conservationists.

Thank you for joining us as we welcomed this significant contributor to science and heard about their fascinating research. For more information about The Whitney Lecture or Whitney Laboratory, call 904-461-4000.